Haan, Germany January 21, 2021    Walther Trowal has significantly expanded the facilities of its subsidiary in Grand Rapids, Michigan, that was founded in 2005. It now offers its customers in North- and South-America „just-in-time“ delivery times for the mass finishing media and compounds.  In the substantially upgraded „Process Development Lab“ experienced and knowledgeable application engineers assist the customers to optimize the surface finishing solutions for their work pieces.

With the move into a substantially larger facility the Walther Trowal LLC in Grand Rapids, Michigan, has now eliminated the disadvantages of two separate physical locations. With a total area of more than 4,000 m² all the company’s business functions are now under one roof: Sales, service and administration and a threefold larger warehouse area for machines, compounds and media. 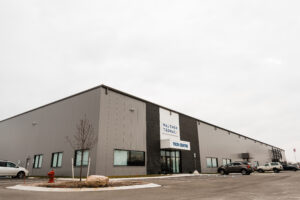 Walther Trowal has also expanded the „Process Development Lab“ that is now equipped with a variety of different finishing machines. It allows the American customers to quickly run processing trials with their work pieces in Walther Trowal machinery and, jointly with the company’s application engineers, improve their finishing processes. The lab is not only equipped with mass finishing and shot blast machinery but also coating systems for mass produced small parts.

In the „Tech & Training Centre“ Walther Trowal offers application and training seminars, which are primarily attended by distributors but also by customers from the automobile, machinery building and aerospace industry.

With the new facility Ken Raby, Vice President and General Manager of the Walther Trowal LLC, can now serve his North- and South-American customers even better: „We have significantly expanded our warehouse capacity. This enables us to ship standard media and compounds to our customers from Grand Rapids “just-in-time”. In addition, we are stocking numerous mass finishing machines, which can now be shipped instantaneously”.

Several application and sales engineers at the Grand Rapids office support the already existing nine distributors in the United States and Canada, including the subsidiary company in Queretaro, Mexico. At this location the Walther Trowal LLC founded the Walther Trowal S.A. de C.V. in January 2020. With initially three employees this office has also a test lab and a sizable stock of Trowal products.

Christoph Cruse, general sales manager at Walther Trowal in Haan/Germany, explains why the company is further expanding its presence in the Americas: „We see a continuously growing flow of customer enquiries and purchase orders from North- as well as South-America. Both markets are undergoing a steady growth. With short response times, a large warehouse capacity and intensive on-site technical support, our American customers have perceived us for quite a while as a local player in the field of surface finishing”.

Walther Trowal produces all its mass finishing, shot blasting and coating equipment, as well as compounds and plastic media, at its headquarters in Germany. Ceramic grinding and polishing media are still produced in Great Britain at a facility in Stoke-on-Trent.

TESTING TO GIVE YOU THE PERFECT PROCESS

Are you looking for the perfect way to process or coat your workpieces? We will be happy to support you here with our expert knowledge. Based on your workpieces and a special question sheet, we can develop the right processing system in our test labs.

You have reached the Walther Trowal LLC North American website.